This is the water based quick drying pen which is convenient to draw an illustration, and letters for a message card, and a greeting card.

The general brush-pen is made with each hair like a calligraphy pen, but Pentel Fude touch sign pen is made with urethane material, and the bottom of the pen point is guarded in firm material.

In other words, the pen tip bends soft but the bottom of the pen tip doesn’t spread out because it is hardened.

The pen point is shaped like a brush, but can be written by high pressure of a brushstroke comparison with a general brush pen considerably firmly because it is not hair.

It can be written easily from a hand writing thin line to thick line such as calligraphy in felt-tip pen.

Suitable for people who are not familiar with brush pen even children can use happily too.

Available in other range of colour

This product doesn't have a refill. 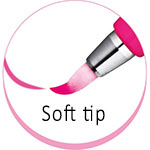